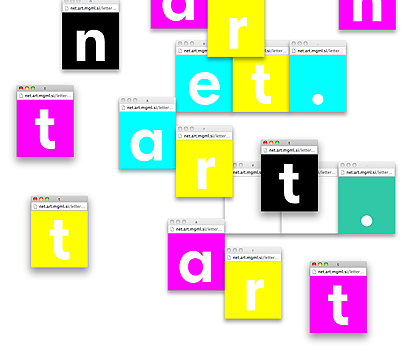 “Why an exhibition of net.art at the Mestna galerija in Ljubljana? First and foremost, it is a matter of continuing an exhibition series that forms an important part of the program scheme: themed exhibitions that broach questions relating to how various media novelties affect the social, societal, and political paradigms of the world today.”

Thus, two years ago we focused on the phenomenon of the global spectacle called association football. The idea was to draw parallels between two spheres that seemed worlds apart, although, as became apparent during the process of staging the exhibition, they are in reality interconnected – football and art. Last year we tackled the subject of television, a medium that has left an indelible mark on society over the past fifty years; the question underpinning the show was the impact this one-way transmitter of images has on an individual’s perception of reality. Now, as a logical conclusion or perhaps a completely new issue, we are broaching the subject of the Internet and the art related to it. Of all the exhibitions mentioned, this one likely raises the highest expectations in terms of interpretations and examination of the effect the medium has on contemporary society (especially in view of the events of recent years, think WikiLeaks and E. Snowden), yet it is also the most formalistic of all three. Formalistic in the sense of its display and the selection and presentation of the works. 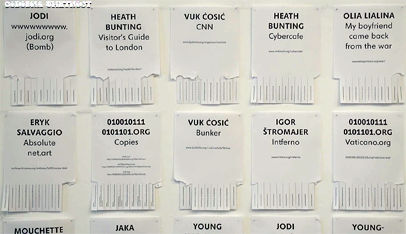 The other reason for staging an exhibition of net.art is that works presented are part of an art movement that did not occur with a delay in our country; on the contrary, artists from our geographical region actively co-created the crucial premises of this new domain in art. We need only mention a Slovenian artist pertaining to the very first generation, the so-called pioneers of net.art, Vuk Ćosić, who has also been invited to help us conceive and realize this exhibition project. A point to add is that net.art has been valued since its beginnings by the Western art world, which had in the past predominantly dictated art historical narratives.

The first floor of the gallery is homage to selected international exhibition projects, whether they were received as examples of good or bad practice. These were projects that, over time, tried out diverse approaches to presenting net.art in art institutions. This puts the underlying idea and the quintessence of such art – its distance from the established institutional art system – into a paradoxical position: it is absurd to show such art in gallery spaces. The second floor hosts works by younger-generation artists proposed by invited older-generation artists. Of course, the works produced by this generation of artists have originated in a different Internet environment than the works of their predecessors, and pertain, for the most part, to what theory has named post-Internet art or Internet-aware art.