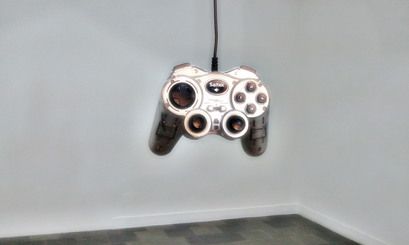 Štromajer has placed Emobot, an emotional robot, in the gallery. Emobot is not a work of art nor does it produce art. Its only artistic value is absence (of production) of art. Emobot produces art by not producing it, by active omission of production. It is (and it isn’t) an artistic action, performed by not being performed. In other words – it is created by not being created. Emobot is an art work actively absent from the exhibition: the most radical artistic action is the one performed by not performing it. Emobot functions by not functioning, by omitting its functioning. And when it is active, we are not aware how it functions, and actually we don’t want to know. Emobot is omissive art: “Philosophers have so far only changed the world, this is about interpreting the world!”
The work was created in the context of exploring omissive art, the status of art in contemporary society as well as of the value and impact of an artistic action.

Ida Hiršenfelder (guided tour of the exhibition) standing next to “Emobot”

The exhibition Robot Museum includes fields such as interactivity, robotics, informatics and multimedia. It’s the first comprehensive exhibition of this part of contemporary Slovenian art. The project involves exploration, production and exhibition of robots and their cultural content, as well as software-art, intermedia installations and performance. The word robot means a machine controlled by computer and programmed to move or perform specific tasks. This universal term was first used by Czech writer Karel Čapek (suggested by his brother Josef Čapek) in his play R.U.R (Rossum’s Universal Robots, 1920). In industry robots perform repetitive tasks or carry heavy loads. Some are designed to work in dangerous situations or they explore space and sea depths. They are equipped with sensors or video cameras and are even programmed to make decisions.

Until recently Slovenia hasn’t devoted much attention to robots and their contextualization in fine arts. This exhibition is based on previous researches and theoretical placements, and presents a transition from kinetic to cybernetic art. It will also raise questions about placement of robots as new media products in the field of arts. At the same time it will establish a bridge between science and art which are subjects of separate disciplines, but in the case of robots they represent an indispensable link.

With this project Maribor Art Gallery and MKC Maribor would like to present phenomena of robots in the arts and culture. The exhibition aims to encourage connection and dialogue between technical culture, its development and artwork, while developing innovative transfer of knowledge and skills.